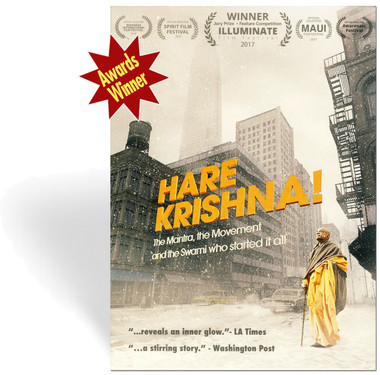 It had been a long journey but Prabhupada's story finally made it to the big screen in June of 2017. There, the film won the Grand Jury Prize for Best Film at the Illuminate Film Festival, and screened in multiple festivals across the globe. The film premiered publically June 16 in New York City and that weekend had the highest 'per screen average' attendance, beating out all other independent films in North America.

HARE KRISHNA! has packed out theaters across the world, with thousands upon thousands of people discovering or reliving Srila Prabhupada's powerful story. To date, the film has screened in 35 countries over 2000 times. DVD with subtitles in 17 languages giving a worldwide audience access to the film for many more years to come!

The DVD of the feature-length documentary Hare Krishna! The Mantra, the Movement and the Swami who started it all, comes with Special Features including About Krishna Consciousness, Additional Scenes, and the Official Theatrical Trailer.