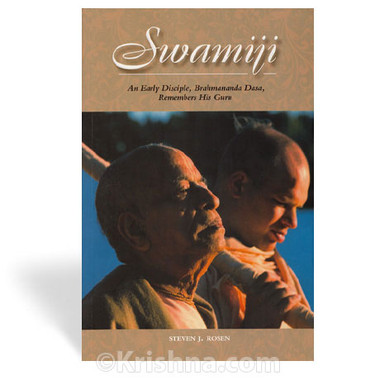 As one of Srila Prabhupada's first disciples in New York—and ISKCON's first temple president (when there only was one temple)—Brahmananda Dasa (Bruce Scharf) was present from the inception of the International Society for Krishna Consciousness in 1966. In Swamiji, Steven Rosen gives us Brahmananda's unique perspective onSrila Prabhupada's methods, accomplishments, teachings and personality.

Brahmananda was involved in almost all of the activities that Srila Prabhupada set in motion: dancing and chanting in City parks, producing the first editions of Back to Godhead magazine, arranging meetings and lectures, and overseeing ISKCON’s first book publications.

As one of the few disciples with a salaried job, Brahmananda helped fund a fledgling society that would quickly grow into an international organization—one of the fastest growing spiritual movements in history—with temples and millions of members all over the world.