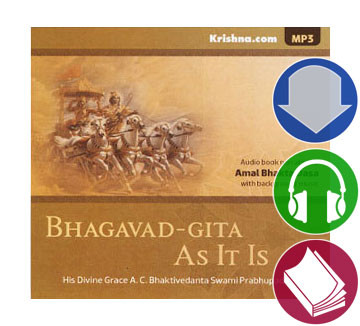 Original text from Srila Prabhupada's Bhagavad-gita As It Is. Narrated by Amal Bhakta Dasa.

The Bhagavad-gita is a must-read for anyone interested in the meaning of life. One of the world's best known literatures, it is often considered the essence of all wisdom. It's a conversation between the military hero Arjuna and his friend/advisor/charioteer Krishna, spoken just before the apocalyptic Battle of Kurukshetra. Subjects they discuss include the eternality of the self, destiny, the source of our being, and how to achieve genuine, long-term peace and happiness.

01. Introduction
02. Chapter 1: Observing the Armies on the Battlefield of Kuruksetra
03. Chapter 2: Contents of the Gita Summarized
04. Chapter 3: Karma-yoga
05. Chapter 4: Transcendental Knowledge
06. Chapter 5: Karma-yoga--Action in Krishna Consciousness
07. Chapter 6: Dhyana-yoga
08. Chapter 7: Knowledge of the Absolute
09. Chapter 8: Attaining the Supreme
10. Chapter 9: The Most Confidential Knowledge
11. Chapter 10: The Opulence of the Absolute
12. Chapter 11: The Universal Form
13. Chapter 12: Devotional Service
14. Chapter 13: Nature, the Enjoyer and Consciouness
15. Chapter 14: The Three Modes of Material Nature
16. Chapter 15: The Yoga of the Supreme Person
17. Chapter 16: The Divine and Demoniac Nature
18. Chapter 17: The Divisions of Faith
19. Chapter 18: Conclusion--The Perfection of Renunciation