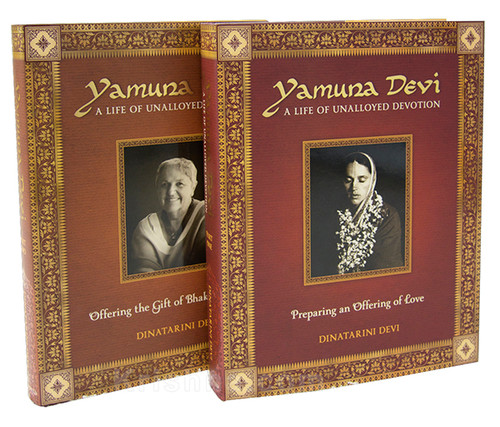 A two-volume illustrated memoir of Yamuna devi—one of the first pioneers to help establish the Hare Krishna movement in the western world—whose singing, cookbooks, artistry, and compassion continue to inspire new generations of Krishna devotees.

Yamuna devi was one of the first pioneers to help establish the Hare Krishna movement in the western world. She met her guru, Srila Prabhupada, in New York City in 1966, and from then on became one of the movement's most visible and influential members.

Her passion for excellence pervaded every project she became involved with, from recording a best-selling Hare Krishna album with George Harrison of the Beatles, personally cooking for Srila Prabhupada during his first tour of India with Western disciples, publishing two award-winning cookbooks, or building ashrams for devotional practice in Oregon and British Columbia.

An expert calligrapher, artisan, chef, and public speaker, her legacy continues to inspire new generations of Krishna devotees all over the world.

This two volume illustrated memoir and biography unfolds the inspiring internal and external spiritual odyssey of Yamuna’s devotional life, recalled in her memories, talks, journals and writings, as well as through the remembrances of the author, Dinatarini devi—her godsister and companion of 37 years—and other associates and friends. It is richly supplemented with many rare photos, Yamuna’s calligraphic works, illustrations and art.

The Nectar of Devotion

The Journey Home: Autobiography of an American Swami, Audiobook CDs

Vanity Karma: Ecclesiastes, the Bhagavad-gita, and the meaning of life