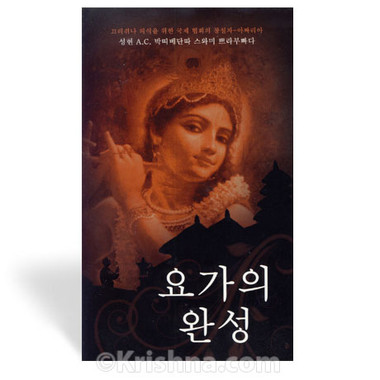 The Perfection of Yoga, Korean

By His Divine Grace A.C. Bhaktivedanta Swami Prabhupada As yoga grows in popularity, there is also a growing need for clear and authoritative information about the actual objective of yoga. Krishna, who spoke the ancient yoga guidebook Bhagavad-gita five thousand years ago in India, explains that the whole point of yoga is to promote physical and mental peace, so that one can meditate on the Supreme Person dwelling within.

The Perfection of Yoga has become one of the most popular introductory books on the science of developing spiritual consciousness. This compact yet profound book addresses many common misconceptions about the purpose of yoga practice. It was spoken in September, 1966 in New York City as a series of lectures by Srila Prabhupada, the founder of the Krishna consciousness movement.