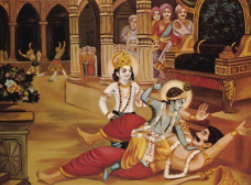 The Advent of Lord Krishna
by Govinda American Theater Ensemble

This is a live recording of a play called The advent of Lord Krishna by the Govinda American Theater Ensemble on Janmashtami of 1980 at the Radha Govinda Theater in New York, NY.

It is based off of Srila Prabhupada?s KRSNA Book and the Tenth Canto of the Srimad Bhagavatam. It is directed by Nanda Kisora Das and Loka Mangala Das, and script written by The New York Temple Players.

It is only one file of 49 minutes and 33 seconds long.