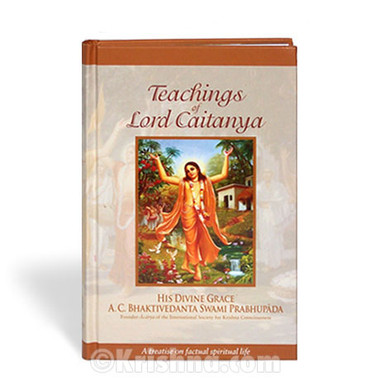 Teachings of Lord Chaitanya is an introduction to the most advanced and esoteric subjects contained within Krishna conscious philosophy, as presented by Chaitanya Mahaprabhu. The text is a summary of the multi-volume biography Chaitanya Charitamrita, which contains some of the most elaborate, technical, and ecstatic revelations of the science of God found in any scripture.

Mahaprabhu—Krishna Himself in the guise of His own ardent devotee—instructed His leading followers, such as the Six Goswamis to write books on the science of God realization. In Teachings of Lord Chaitanya He systematically explains how each of us naturally has a unique relationship of loving service to the Supreme Person which can be awakened through the practice of bhakti-yoga, Krishna consciousness, essentially by chanting Krishna's names.

The author, Srila Prabhupada, wrote Teachings of Lord Chaitanya many years before completing the full-length Chaitanya Charitamrita or even the Srimad-Bhagavatam. As a representative in the line of disciplic succession coming down from Chaitanya Mahaprabhu Himself, He competently explains the great significance of Mahaprabhu's teachings; they give the world unprecedented access to the highest states of pure love of God.

"For the present edition, the editors compared the two previous editions (the original manuscript is lost) and restored some of the flavor of the original. In addition, they found that, perhaps owing to Srila Prabhupada's heavily accented English, the uneven quality of his dictated tapes, or the difficult philosophical concepts in some passages of Teachings of Lord Chaitanya, the original transcribers and editors had occasionally erred. These errors, constituting less than three percent of the total text, have now been corrected, so that an already perfect book has become even more perfect for its increased fidelity to Srila Prabhupada' original words and intended meaning."