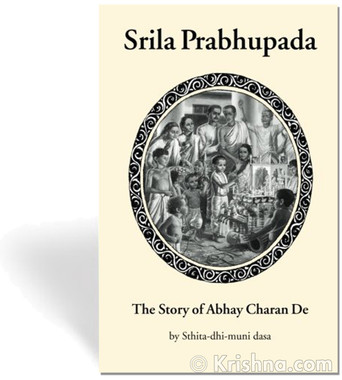 Srila Prabhupada is famous as the founder of the worldwide Hare Krishna movement. He opened more than a hundred temples and translated sacred scriptures explaining the devotional science of God, most intimately known as Krishna, the all-attractive. But before coming to the West, Srila Prabhupada spent most of his life in India. He was known to his family and friends as Abhay Charan De.

This is the story of young Abhay as he grew up in India and later, as an elderly gentleman, traveled to America. It follows Abhay as he goes to school, then college, starts a family and business, and as a young man meets his future spiritual master, Srila Bhaktisiddhanta, who inspires him to follow Lord Chaitanya and spread the message of Krishna consciousness around the world as had never been done before.

Though this adaptation of the Srila Prabhupada Lilamrita was written for children, everyone will enjoy reading about the life of this great devotee. The book was written at a sixth and seventh grade reading level.