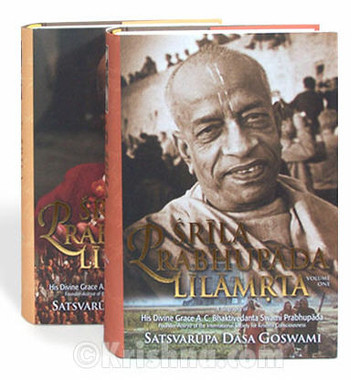 In 1965, at the age of 69, Srila Prabhupada traveled alone and with only a trunk of books and a few dollars in his pocket on a cargo ship from Calcutta to New York City, arriving at the height of the youth counterculture wave of the 1960s. Living amid bohemians, beatniks, hippies and self-proclaimed drug prophets, his mission was to turn on whomever would listen to the chanting of Hare Krishna and the teachings of the Bhagavad-gita.

During the next twelve years he would attract thousands of followers, publish dozens of volumes of translation and commentary on the sacred Vedas, establish over a hundred centers of the International Society for Krishna consciousness throughout the world, make "Hare Krishna" a household word, and jump start one of the fastest growing spiritual movements in history.

The research team assembled by the author gathered thousands of hours of interviews with hundreds of people who knew Srila Prabhupada. Diaries and memoirs from his students, and more than seven thousand of Srila Prabhupada’s letters. Then the author and his team distilled this voluminous first-hand source material into a rich composite view of Srila Prabhupada, a dazzling and colorful picture of one of the most remarkable persons of our times.

This product is exempt from store sales and promotions.

Limited Edition. Imported from Europe. When these are gone, they’re gone.