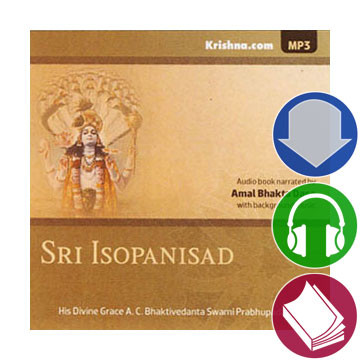 Sri Isopanishad is one of the first books Srila Prabhupada published in the course of establishing the Hare Krishna movement in the Western world. Its eighteen mantras—Vedic hymns—are meant to focus the mind in meditation on the Supreme Person, Krishna.

Sri Isopanishad's mantras direct our attention toward how the Supreme Person is the complete whole of existence, and that all manifestations emanating from Him—including our bodies and the world we inhabit—are also complete in and of themselves. The Isa—"supreme controller"—for whom Isopanishad is named, is described as both far away and near, walking and not walking, and both within and outside of everything.

In the book's Introduction—adapted from a lecture Srila Prabhupada gave in London in 1968—he explains how the Vedas' teachings are perfect; Vedic sound is not of this world, not created by man, and thus not subject to human frailty and imperfection. Isopanishad is one of the principal Upanishads in Vedic literature that present the ultimate philosophical conclusions of all scripture.

Srila Prabhupada composed Sri Isopanishad with the same scholarly standards as his Bhagavad-gita As It Is and Srimad-Bhagavatam, providing the original Sanskrit verse, its English transliteration, word-for-word Sanskrit-English equivalents, translations and purports. In his words, "This makes the book very authentic and scholarly and makes the meaning self-evident."

Slight imperfections have occurred during the transfer from the original cassettes to the MP3 format.