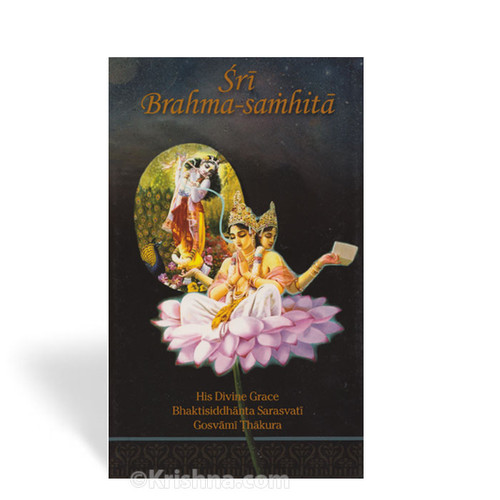 Sri Brahma-samhita is a collection (samhita) of prayers spoken by Brahma at the beginning of material creation, after the Supreme Person Krishna gave Brahma a divine vision of the spiritual world. Brahma, in his amazement, speaks volumes of divinely inspired praise before beginning his work of creation. Sri Chaitanya Mahaprabhu acquired the Fifth Chapter of the Brahma-samhita from the Adi-keshava temple in South India. This commentary of Sri Brahma-samhita was written by Srila Bhaktisiddhanta Sarasvati Thakur, the spiritual master of Srila Prabhupada, who spread Krishna consciousness all over India during the early twentieth century

Srila Prabhupada has the following to say about the Brahma-samhita (from his purport to Sri Chaitanya Charitamrita, Madhya-lila, 239-240):

"The Brahma-samhita is a very important scripture. Sri Chaitanya Mahaprabhu acquired the Fifth Chapter from the Adi-keshava temple. In that Fifth Chapter, the philosophical conclusion of achintya-bhedabheda-tattva (simultaneous oneness and difference) is presented.
The chapter also presents methods of devotional service, the eighteen-syllable Vedic hymn, discourses on the soul, the Supersoul and fruitive activity, an explanation of Kama-gayatri, kama-bija and the original Maha-Vishnu, and a detailed description of the spiritual world, specifically Goloka Vrindavana.
The Brahma-samhita also explains the demigod Ganesha, Garbhodakashayi Vishnu, the origin of the Gayatri mantra, the form of Govinda and His transcendental position and abode, the living entities, the highest goal, the goddess Durga, the meaning of austerity, the five gross elements, love of Godhead, impersonal Brahman, the initiation of Lord Brahma, and the vision of transcendental love enabling one to see the Lord. The steps of devotional service are also explained.
The mind, yoga-nidra, the goddess of fortune, devotional service in spontaneous ecstasy, incarnations beginning with Lord Ramachandra, Deities, the conditioned soul and its duties, the truth about Lord Vishnu, prayers, Vedic hymns, Lord Siva, the Vedic literature, personalism and impersonalism, good behavior, and many other subjects are also discussed. There is also a description of the sun and the universal form of the Lord. All these subjects are conclusively explained in a nutshell in the Brahma-samhita."

Narada-Bhakti-Sutra: The Secrets of Transcendental Love

The Nectar of Instruction