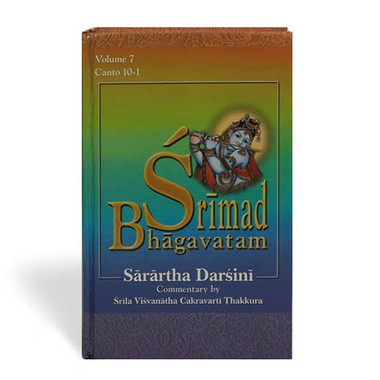 Vishwanatha Chakravarti Thakura's commentaries on the first part of the tenth cantos of the Srimad-Bhagavatam. Srimad-Bhagavatam, an epic philosophical and literary classic, holds a prominent position in India's voluminous written wisdom. This ancient text touches upon all fields of human knowledge.

This canto describes Krishna's childhood activities starting with his birth until Akrura's arrival in Vridnavana.

Vishwanatha Chakravarti Thakura was born in C.E. 1662 in the village of Devagram, Bengal. He received initiation from Ramana Chakravarti, and his name after taking sannyasa was Hari Vallabha Goswami. Vishwanatha Chakravarti wrote more than forty Sanskrit books, including commentaries on Bhagavad-gita, Srimad-Bhagavatam, and the writings of the Six Goswamis of Vrindavan.