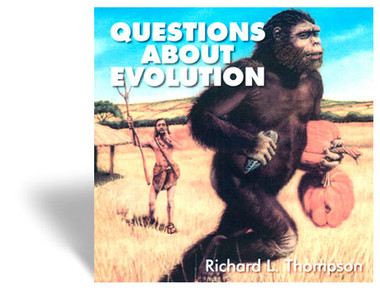 The Hidden History of the Human Race (Part I): Produced by Richard L. Thompson. 30 minutes. This video sheds new light on the modern theory of human evolution by presenting several examples of suppression and misrepresentatiion of evidence in the fields of acheology and paleoanthropology. It shows how the present theory, considered by many to be factual, has been developed and maintained by ignoring and discrediting evidence of equal or better quality that is against it. The anomalous evidence presented is a small fraction of the total gathered. All the evidence is described in the book Forbidden Archeology, and summarized in the condensed edition, The Hidden History of the Human Race, both available at Krishna.com. This video is for general audiences.

Models of Natural Selection: Produced by Richard L. Thompson. 30 minutes. The neo-Darwinian theory of evolution is based on the assumption that all existing organisms are connected to on another by closely spaced chains of viable intermediate forms. Unfortunately, this assumption is seldom subjected to careful scientific scrutiny. This video shows the need for clearly defined models in the neo-Darwinian theory of evolution. It shows that required intermediate forms fail to exist for certain key models, and it discloses the inadequacy of the theory in general. The video is based on a lecture delivered at a scientific conference on evolution in Budapest. It is aimed at scientifically oriented audiences. Produced by Richard L. Thompson. 30 minutes.

Note: These disks are DVD-Rs, which will play on most computers with DVD drives and DVD viewing software. May play on some set-top DVD players but there is no guarantee. Check your manual or player specifications to verify if yours plays 'DVD-R' disks. We apologize for any inconvenience these compatability issues may cause.