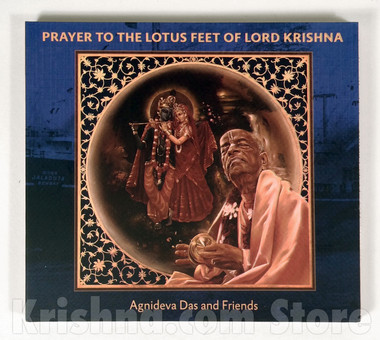 Prayer to the Lotus Feet of Lord Krishna

These timeless prayers of the Vaishnava acharyas are rendered with devotion by Agnideva Das, whose life is dedicated to sharing these songs and spreading the joy of kirtan throughout the world. At the heart of the album is the prayer written by His Divine Grace A.C. Bhaktivedanta Swami Prabhupada in 1965, during his epic ocean journey from Calcutta to New York.

Agnideva Das is a kirtan legend. Originally from Trinidad, he joined the Hare Krishna Movement in New York City in the early 1970s. He notes: "This album has truly been a globally collaborative effort. It was seeded in Johannesburg, sprouted in Alachua, Florida, and finally bloomed in London. I am particularly grateful to all of Srila Prabhupada's grandchildren – ISKCON's second generation – who joined in with great enthusiasm to lend their voices and musical accompaniment. Together we present this offering for the pleasure of Srila Prabhupada in ISKCON's 50th anniversary year."

2. Saranagati 11:38
The Process of Surrender