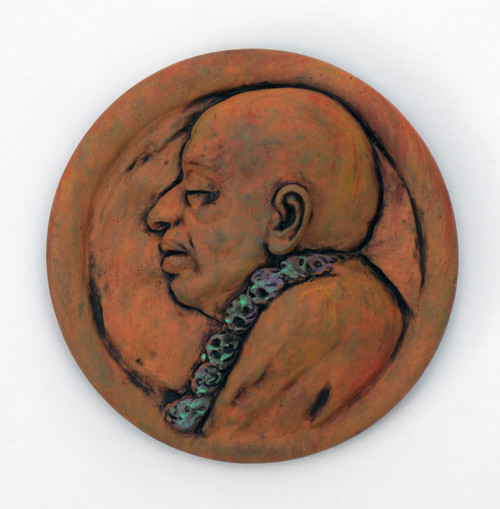 Depicts Srila Prabhupada, the founder and preceptor of the International Society for Krishna Consciousness (ISKCON), commonly known as the Hare Krishna movement. In 1965, he traveled to the west at the advanced age of 69, as a renounced Swami with no apparent money or facility, but with a firm faith in the instructions of his guru to share the wisdom teachings of Krishna consciousness with a world absorbed in rampant materialism. In the few short years until his passing, in 1977, His Divine Grace A.C. Bhaktivedanta Swami Prabhupada transformed the hearts of thousands of followers, translated and wrote some 60 books, and firmly established an international confederation of temples, farm communities and schools to teach people how to become happy by reconnecting with their eternal source of happiness, Krishna (God), through engaging in His service. He taught the essence of the Bhagavad-gita, the art of serving Krishna with love, Bhakti-yoga; that the most practical way to uplift our minds from the miseries of material existence is to absorb ourselves in the chanting of God’s Holy Names, while going about our worldly duties and responsibilities.

Part of a collection of sculptures hand-made by Krishna devotee artist Haydn Larson, a.k.a. Adideva Das, a disciple of Srila Prabhupada. In his youth, Adideva helped create the FATE Museum diorama sculptures in Los Angeles and Detroit, illustrating the philosophy of the Bhagavad-gita. Now he lives with his wife Siladitya in the Alachua, Florida Hare Krishna community, where he continues to pursue his passion for sculpting objects large and small, from portable “Changing Bodies” exhibits to these plaques and Happy Rocks. (Be sure to search our store for “Happy Rocks” to see other sculptured miniatures by Adideva. They’re quite something!)

Comes with an embedded wire loop on the back, can be hung on a wall, or placed as a decorative item on your altar, desk, fireplace mantle, bookshelf or anywhere around your home or office.

Created in clay then cast in crushed stone.

Prayer to the Lotus Feet of Lord Krishna