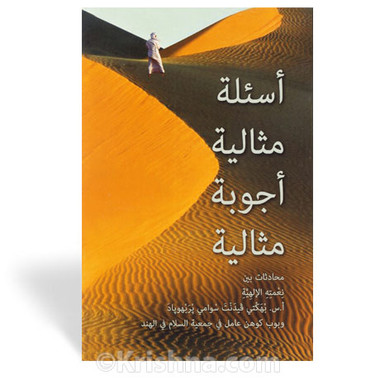 This is the Arabic edition.

Bob Cohen, a young American Peace Corps worker living in India, decides to visit some of his countrymen, members of the International Society for Krishna Consciousness, who are establishing an international spiritual community in Mayapur. Mayapur is the birthplace of Chaitanya Mahaprabhu, the devotee/incarnation of Krishna who popularized widespread chanting of the names of God five hundred years ago.

To Bob's surprise, he is invited to meet the founder and spiritual leader of the Hare Krishna movement, His Divine Grace A.C. Bhaktivedanta Swami Prabhupada.

For several days, in a small, brick and thatch hut near the banks of the holy Ganges, Bob asks Srila Prabhupada every question on spirituality he can think of. A tape recorder is running the whole time, and later their conversation is transcribed.

Perfect Questions, Perfect Answers has been reproduced in forty languages and remains one of the most popular introductions to Krishna consciousness across many languages and cultures.