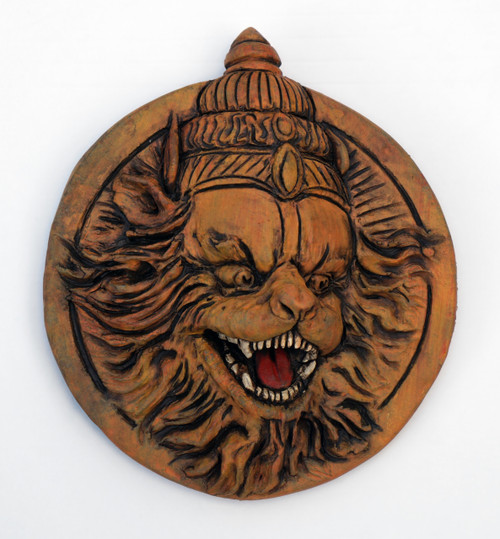 The half-man, half-lion incarnation of Krishna. Once there was a demon king, Hiranyakashipu, who had been tormenting his own son, the saintly Prahlad, a devotee of Krishna (God). At one point, the demon king became so angry he was about to kill Prahlad, when suddenly, the most magnificent and ferocious form of Krishna appeared on the scene to rescue His dear devotee from the death throws of the demon. Devotees pray to Lord Narasimha that He may kindly protect them in their time of need.

Part of a collection of miniature sculptures hand-made by Krishna devotee artist Haydn Larson, a.k.a. Adideva Das, a disciple of Srila Prabhupada. In his youth, Adideva helped create the FATE Museum diorama sculptures in Los Angeles and Detroit, illustrating the philosophy of the Bhagavad-gita. Now he lives with his wife Siladitya in the Alachua, Florida Hare Krishna community, where he continues to pursue his passion for sculpting objects large and small, from portable “Changing Bodies” exhibits to these plaques and Happy Rocks.

(Be sure to search our store for “Happy Rocks” to see other sculptured miniatures by Adideva. They’re quite something!)

Comes with an embedded wire loop on the back, can be hung on a wall, or placed as a decorative item on your altar, desk, fireplace mantle, bookshelf or anywhere around your home or office.

Created in clay then cast in crushed stone.