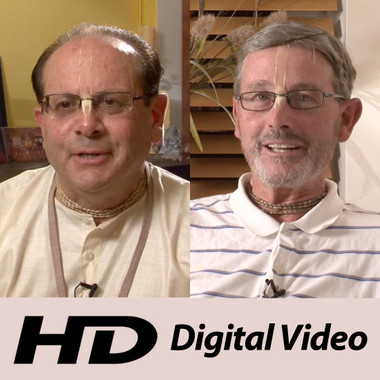 Memories of Srila Prabhupada by Pragosh Dasa and Ramesvara Dasa

The Memories video series features disciples remembering His Divine Grace A.C. Bhaktivedanta Swami Prabhupada, the modern-day saint who founded the International Society for Krishna Consciousness, commonly known as the Hare Krishna Movement. At the advanced age of 69, Srila Prabhupada set out on a cargo ship from Kolkata to New York, to spread a profound message of peace and happiness from the teachings of ancient India.

As a sannyasi (holy man) he had few possessions. He brought with him a trunk of books, some clothes, and a handful of rupees. In just 12 short years he transformed the hearts and lives of thousands of people, translated more than 50 volumes of Bhakti-yoga literature from Sanskrit into English with elaborate commentaries, circled the world 11 times on lecture tours, debated with leaders, scholars, scientists, established over 100 temples, farm communities, schools and vegetarian restaurants, starting an international movement that is expanding to this day. How did he do it? Why did people follow him? What motivated him? Find out by watching the stories told by the people who met him.