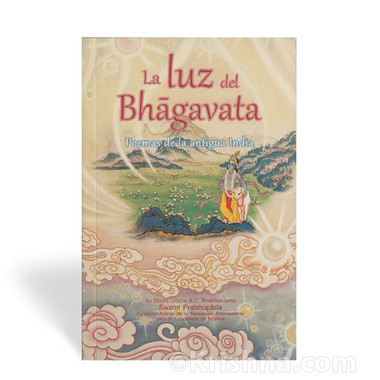 Light of the Bhagavata, Spanish

The Spanish edition of Light of the Bhagavata.

In 1961, Srila Prabhupada was invited to Japan to make a presentation at the Congress for Cultivating the Human Spirit. He expected that such an audience would appreciate descriptions of nature and think autumn particularly auspicious, so he chose for his subject one chapter from the Srimad-Bhagavatam's Tenth Canto which describes the autumn season in Vrindavan, the place of Lord Krishna's appearance on earth.

For his presentation, he envisioned an illustrated book, juxtaposing Bhagavatam verses with authentic Asian art, to be prominently displayed at the conference. However, Srila Prabhupada wasn't able to attend, and the project was shelved. Then, seven years after his passing, in 1984, the Bhaktivedanta Book Trust discovered the manuscript and commissioned artist Madame Li Yun Sheng to create the accompanying artwork for the book Srila Prabhupada had intended to call Light Of The Bhagavat.