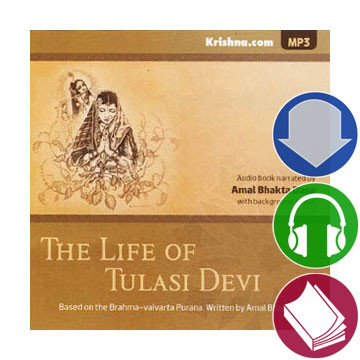 Written and Narrated by Amal Bhakta Dasa. The text was reviewed and approved by Gopiparanadhana Dasa, Sanskrit editor of the BBT.

Tulasi Devi is often called one of the greatest devotees for her humility, chastity and strength. As Princess Tulasi, she married for political reasons, even though she had sworn that her true husband is Lord Vishnu. This is the beginning of a mystical tale which explains the worship of the Tulasi tree, Gandaki River, Salagram-sila (stone deities), and the conch shell.

Also, one will discover the many benefits one obtains by worshipping the Tulasi plant and Salagrama-sila. The narration is performed with many voice characterizations, is accompanied by an original musical arrangement and is interspersed with numerous sound effects to heighten the drama's realism.