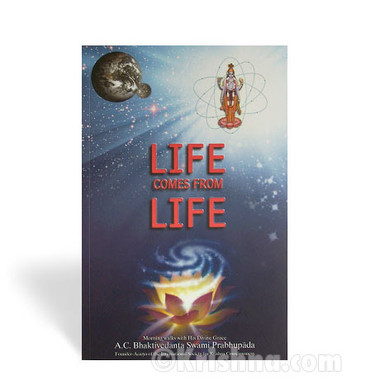 The Spanish edition of Life Comes From Life.

Theories about the origin of life come and go like fashion trends, but India's Vedic tradition has forever had a consistent explanation of how life arises—not from nothingness but from consciousness. Why should we believe something can come from nothing, when all around us, every day, we see life coming from other life?
Srila Prabhupada trained his academically qualified disciples to use logic, reason, and scientific methods to discredit atheistic and materialistic theories, such as the notion that life comes from nothing. Life Comes From Life is a collection of such talks between Srila Prabhupada and one of his Ph.D. disciples—Thoudam D. Singh, Ph.D., an organic chemist—in Los Angeles during the mid-1970's.

Life Comes From Life has inspired religionists, scientists, and laymen alike to reexamine long-held, dogmatically indoctrinated beliefs about the self, the world, and the origins of life.