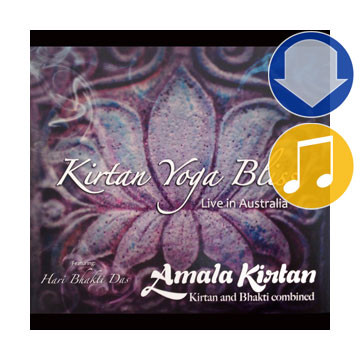 Melodic and heartfelt, this is a must-have album for those who love live bhajans and kirtans. Recorded during Amala Kirtan's 2010 Australia tour, these songs have been skillfully remastered into a studio-quality production. Amala Kirtan's wonderful vocals are accompanied by mridanga, kartals, harmonium, flute, guitar and bass guitar. Each song is sung in the traditional call-and-response style of kirtan. This album also features guest vocalist Hari Bhakti Dasa.

This is humbly dedicated to Sripad Aindra Prabhu who was the inspiration to all of us during the tour. The news that he had left this world came during the first 24-hour Kirtan in Canberra 07.16.2010, which was also my first Kirtan performance in Australia.

My daughter Vrinda Oliveira is one of my reasons for doing Kirtan. She was diagnosed with Angelman Syndrome in 2010, a condition that might prevent her from singing in this life. I sing on her behalf. - Sincerely, Amala Kirtan das