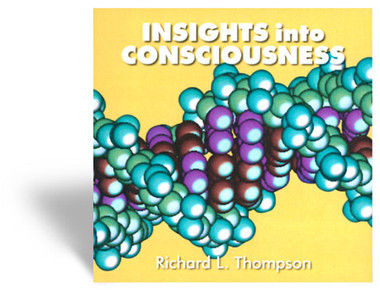 SIMULATED WORLDS: Produced by Richard L. Thompson, 45 minutes. When computers appeared, some scientists predicted it would soon be possible to simulate the human mind. Decades passed with little progress. Now a new approach has begun. Scientists are experimenting with projecting the consciousness of subjects into robot bodies moving within computer-simulated worlds. The senses of human subjects are linked to a computer, using video monitors and joint movement sensors. This enables the subjects to experience themselves to be seeing and moving within a three-dimensional computer-generated world. The movie The Matrix has popularized this idea. This video reviews some examples of simulated worlds technology. It also explores parallels between the situation of the subject in the simulated world and that of the conditioned self described in Vedic Sankhya philosophy. This video is for general audiences.

MIND AND BRAIN: Produced by Richard L. Thompson, 30 minutes. The relationship between the conscious self and the physical brain has proven puzzling to scientists and philosophers. Mind and Brain explores this relationship, starting with the modern theories and dreams of artificial intelligence researchers. Some AI exponents believe that sophisticated computers can be conscious just as human beings are. Parallel processors simulating neural networks are believed by many to be able to duplicate all human cognitive abilities. However, here we see that consciousness involves more than just extremely complex behavior, whether that of a brain or that of a computer. Philosophical arguments and empirical evidence are introduced indicating that the conscious self is distinct from the physical body. This video is intended for college classroom presentations.

Note: These disks are DVD-Rs, which will play on most computers with DVD drives and DVD viewing software. May play on some set-top DVD players but there is no guarantee. Check your manual or player specifications to verify if yours plays 'DVD-R' disks. We apologize for any inconvenience these compatability issues may cause.