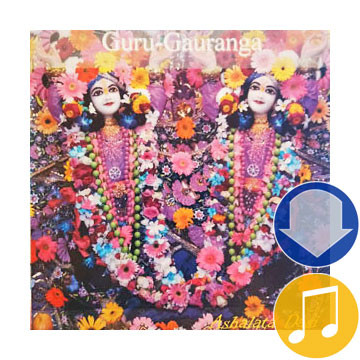 Having sung in kirtans worldwide, Ashalata Dasi now brings kirtan to you.  In this album, Guru-Gauranga, ancient and stirring Vaishnava songs are brought to life through Ashalata's melodious and powerful voice.  These songs are sung routinely in temples across the world.  Listening to these songs will take you on a spiritual journey and transform your heart.

Ashalata Devi Dasi is a disciple of Srila Prabhupada and has been serving in ISKCON for over 40 years.  She had the priviledge to have darshan with Srila Prabhupada many times in North America and India, including visits to her home in 1975 and 1976.

Ashalata has been singing devotional songs since childhood.  She sings kirtan and bhajans as an offering to the Lord and composes many songs form the heart.  She has a sweet yet bold voice that grabs you and brings you closer to the Lord.