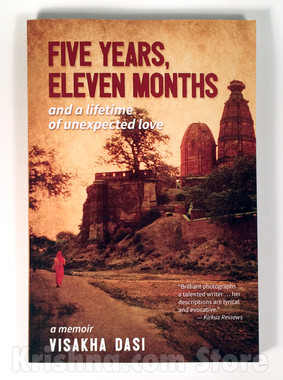 Five Years, Eleven Months, and a lifetime of unexpected love.  A memoir by Visakha Dasi.

"Brilliant photographs... a talented writer ... her descriptions are lyrical and evocative." –Kirkus Reviews

An American photojournalist, disillusioned by the pressures and mindlessness of Western education and consumerism, journeys with a friend to the East looking for fun and adventure. In India she unexpectedly finds truth and knowledge beyond the intellect; beauty and hope beyond the mundane. Slowly, unexpected love softens her skepticism. Her life is never the same.

About the Author: Visakha received an Associate of Applied Science degree with honors from Rochester Institute of Technology and shortly afterwards published her first book, Photomacrography: Art and Techniques. In 1971 she traveled to India, where she met Bhaktivedanta Swami Prabhupada, read his Bhagavad-gita As It Is and eventually became his student. As a photographer, she traveled with and photographed Bhaktivedanta Swami and his students in India, Europe and the United States. As a writer, she has written numerous magazine articles and three books, Our Most Dear Friend, Bhagavad-gita for Children; Bhagavad-gita: A Photographic Essay (recipient of the 2011 Independent Publisher Book Award); and Harmony and the Bhagavad-gita, Lessons from a Life-Changing Move to the Wilderness. Visakha also assists her husband, John Griesser (Yadubara Das), in making documentary films, most recently a 90-minute biography on Bhaktivedanta Swami. They have two daughters and one grandson.

A Joy to read - By Jayadvaita Swami

"Literate and introspective, Visakha’s memoir is a joy to read. Especially engaging is her running account of the tension within herself between her spiritual path and, on the other side, her persistent doubts, her skepticism, and a rational mind always on guard against being spiritually duped. And hers is an extraordinary story. As a young photojournalist, still in college, she journeys first to Nepal and then to India, where she meets a spiritual teacher who shows her much more than she expected to see in her viewfinder and changes the course of her life. Now, nearly fifty years later, she shares with us her adventures, her insights, her reflections, her wisdom. A splendid book!"

"I was a little suspicious because of the title. What did it mean? Why give the book such a cryptic name? Well, not one to be easily swayed, I gave it a close read anyway — and I couldn’t put it down. Title notwithstanding! (It ultimately becomes clear.) I’ve read other spiritual memoirs and this one is right up there with the best of them. Well-written, exciting, logical, and thought-provoking, Visakha Dasi knows what she’s doing. I mean, this is **real** writing, too, with clear descriptions and metaphors prompting visualization and allowing entrance into her way of thinking — and you’re glad you went there.  The author uses figurative expressions with elegant restraint and her manner of presentation is always deeply considered. No cheap shots here. But most of all, she has obviously imbibed the teachings of her master, fully embracing the mysticism of the East. If the writing is first-rate, so is the content. She explains her path well, not only because she is a good writer — no, a GREAT writer — but because she lived what she writes, and is truly living it. This is evident on just about every page of this book. For this and so many other reasons, I can’t praise this too highly: both her writing style and her commitment to her path allow the reader entrance into her totally spiritual worldview, and that’s a great place to be. This is a book for people who like memoirs and for seekers of spiritual truth, and, really, for just about everybody!"

This book is one of a kind. By Ainsley Bresnahan

"This book is one of a kind. While many spiritual memoirs are inspiring, they are often not relatable to the reader. Visakha sparks hope in the hearts of the audience with honesty about her journey. She is sincere about her feelings and not afraid of crossing over the “flowery norms” usually linked with sacred practice. Well written, practical, inspiring, and an addictive read!"