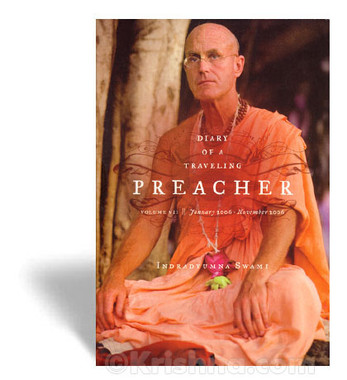 Diary of a Traveling Preacher, Vol. 7

The seventh volume of Diary of a Traveling Preacher is like having a front-row seat in a class about Srila Prabhupada's mission. You'll read about an eleven-year-old girl who covered her ears to block the sound of the holy name but ended up putting on a makeshift sari and joining the procession.

This volume of Indradyumna Swami's diary reads like an adventure movie: being attacked by skinheads and fanatical Muslims, being robbed by corrupt immigration officials, escaping from a dishonest taxi driver in the dead of night on a deserted street - all for the sake of giving Lord Krishna's holy name to unfortunate souls.