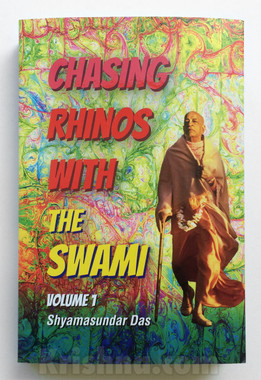 Chasing Rhinos With The Swami, Volume 1.   A memoir by Shyamasundar Das (Sam Speerstra)

A.C. Bhaktivedanta Swami Prabhupada changed the world. When he came to America from India in 1965, few Westerners knew the deep spiritual truths behind ancient Vedic culture and civilization. Within a decade most humans on the planet had heard the Hare Krishna mantra.

Shyamasundar Das (Sam Speerstra) was one of Bhaktivedanta Swami's earliest disciples, helping him shape the Krishna Consciousness movement in the Haight-Ashbury district of San Francisco, in London, and then, as the Swami's personal secretary, he traveled with Prabhupada in India, Russia, and all over the globe. "Chasing Rhinos With The Swami" is the intimate account of Prabhupada's amazing adventures, describing in loving detail the seven years Shyamasundar spent at the side of the perfect person. Nothing was impossible for Srila Prabhupada, and he instilled this idea in the hearts of his first disciples. Go for the rhino!

Contents:  The author's biography along with recollections of the early days of the Hare Krishna movement in San Francisco, including opening the first temple, organizing the Mantra Rock Concert at the Avalon Ballroom, the appearance of Lord Jagannatha, the first Ratha-yatra festival, followed by the movement spreading to Europe via London. For Beatles fans, this volume gives a detailed account of the time Shyamasundar and the Hare Krishna devotees spent living with John Lennon and Yoko Ono, as well as George Harrison's involvement and support that led to the recording of the Hare Krishna single, the "Radha Krishna Temple" album, the printing of the KRSNA Book, and the first temple opening in London.

Rare Photos: The book is replete with more than 130 rare and some never-before-seen photos (b/w and color) of those early days.

“Shyamasundara is about to take us on an incredible adventure into events that transformed our world. We will be witness to unimaginable events, events that made history, while we live side by side with Prabhupada, a humble saint who awakened spiritual love in countless hearts. ... In Volume One, we will be there, in the streets and hideouts of Haight-Ashbury at its pinnacle of cultural change. Then, with the Beatles living at John and George's homes in England during intimate moments of their spiritual exploration. From there, along with Shyamsundara, we will be launched into the spiritual sky to circle the world with Prabhupada. As we travel with him, we will laugh and cry, we will be stunned and utterly amazed while our hearts fill with wisdom and love. This book is masterfully written and is truly unique.” –Radhanath Swami

A Wild and Honest Memoir

"As the cover and title suggest, a wild and honest memoir, written in the lingo of a San Fran hippie "ex-speed freak" finding his guru. I just loved the voice of the author; he does not submit to the devotee lingo so often seen in books on this subject, and he describes it all, as he experienced it, with total self-effacing honesty, neither trying to exaggerate nor minimize the events that transpired. A book for all audiences." –Vrinda Devi Sheth (Author of Shadows of the Sun Dynasty)

Candid, Unpretentious, Real and From the Heart

"I felt like I was right there, experiencing life amidst the kaleidoscopic flower-power era of San Francisco, mingling with rock stars, Hells Angels, and a fledgling group of young devotees trying to grasp and spread Krishna Consciousness. Shyamasundar shares his mind-blowing experiences as if they happened yesterday; he's candid, unpretentious, real and from the heart. He recounts how he and his (then) wife Malati received initiation before they knew what that meant, learned what obeisances were, organized an epic mantra rock concert, carved the first Deities of Lord Jagannatha, were sent to England on a mission, met George Harrison, lived with John Lennon and Yoko Ono, recorded the Hare Krishna Mantra single released on Apple Records, built the first temple in the heart of London... all as an offering of love to Krishna and to Srila Prabhupada, the beloved guru and Founder of the Hare Krishna Movement. Touching. Heartwarming." –Manoram Das