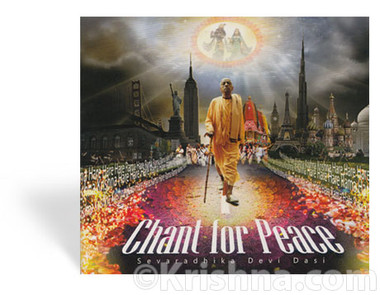 Classic bhajans beautifully preformed by Sevaradhika Dasi. This great selection of bhajans is perfect for your home temple or personal meditation.

Sevaradhika Devi sings with a natural affection which moves hearts. Both classic and traditional yet fresh and modern, she embodies the bridge from eternity to the present through her artistic musical and lyrical translations.

This album is dedicated to His Divine Grace A.C. Bhaktivedanta Swami Srila Prabhupada’s 50th anniversary of coming to the Western world. From East to West and back again 14 times around the globe, Srila Prabhupada brought the Maha Mantra, the great chant for deliverance to every town and village.