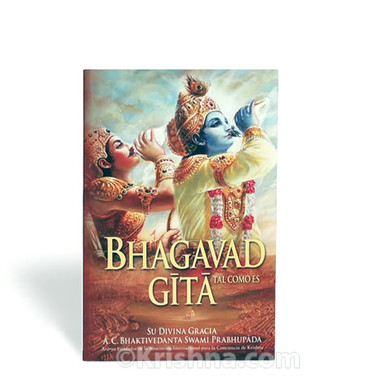 Bhagavad-gita As It Is, Softbound, Compact, Spanish

$9.95
Bulk Discounts for Bhagavad-gita As It Is, Softbound, Compact, Spanish

This is the Spanish Edition of Bhagavad-gita As It Is.

A Spanish edition of the Bhagavad-gita which is the main source-book on yoga and a concise summary of India's Vedic wisdom. The Bhagavad-gita is a must-read for anyone interested in the meaning of life. One of the world's best known literatures, it is often considered the essence of all wisdom. It's a conversation between the military hero Arjuna and his friend/advisor/charioteer Krishna, spoken just before the apocalyptic Battle of Kurukshetra. Subjects they discuss include the eternality of the self, destiny, the source of our being, and how to achieve genuine, long-term peace and happiness.

Since its publication in 1970, Bhagavad-gita As It Is has become the most widely read edition of the Gita in the world.