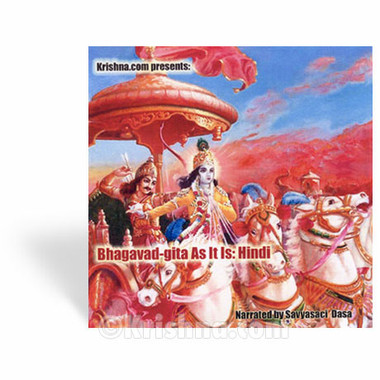 Bhagavad-gita As It Is, Hindi MP3 CD

The Bhagavad-gita As It Is has influenced philosophers, scientists, leaders, and everyday people for centuries. It is regarded not only as a deeply influential scriptural text, but as work of poetry, a glimpse into history, and a source of inspiration. But sometimes hearing the Gita spoken is more powerful than just reading it. It enters the brain through a different doorway, creating a new perspective on what was once just printed words.

Savyasachi Dasa's Hindi narration Srila Prabhupada's translation of the Bhagavad-gita As It Is has received great reviews from listeners around the world. This recording includes only the translations accompanied with background music. The sanskrit and purports are not included.

Original text narrated from Srila Prabhupada's Bhagavad-gita As It Is.

This product is also available as a downloadable audiobook here...

Please note that this is a CD-R disk and is not compatible with older or lower-end MP3 disk players. Will play on most computers, and is ideal for transferring to digital MP3 players.