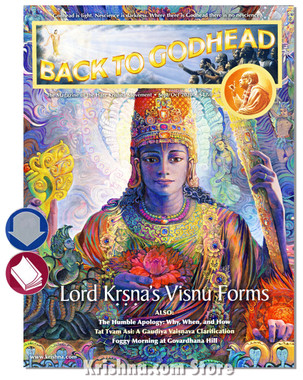 Before Lord Brahma plays his role in the cosmic creation, Krishna’s expansionsset the stage.

Hiranyaksha and Hiranyakashipu exemplify our detrimental desires to possess and control.

“Then Śrīla Prabhupāda stepped out of the car, and my world changed.”

The Humble Apology: Why, When, and How, by Gauranga Darshana Dasa

With all our imperfections, the Lord’s forgiving nature and His mercy are our only hope.

In the end, Krishna’s seeming failure to appease Duryodhana revealed His own greatness.

Although the Advaitins may want to coopt this famous phrase, Vaishnavas have something to say about that.

The early Hare Krishna movement grew because its leader elevated the efforts of his inexperienced soldiers.

Spiritual thoughts arise naturally at the holiest of holy hills.

A Journey from Sustainability to Meditation, by Sakshi-gopala Dasa

Spiritual practices and a healthy planet go well together.

Caring Krishna and His Caring Devotees, by Vishakha Devi Dasi

A devotee sees all as God’s dear children and wants to relieve their misery.

This is the digital download PDF version of BTG Vol. 54, No. 5. Includes the usual departments, such as Letters, Srila Prabhupada Speaks Out, Calendar, and From the Editor. Magazine, 68 pages. 8.25" x 11"