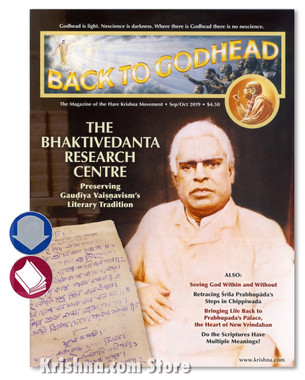 Founder's Lecture: Seeing God Within and Without, by His Divine Grace A. C. Bhaktivedanta Swami Prabhupada

Srila Prabhupada speaks about the qualifications to see God, who is all around us.

In South Kolkata a team of archivists has created a valuable library inspired by Srila Prabhupada’s vision.

The destiny that brought the king much agony leads to his liberation.

Do the Scriptures Have Multiple Meanings? By Gauranga Darshana Dasa

One of the qualities of the Vedic literature is its ability to reach students at different levels, even with the same words.

A Meditation on the Importance of True Humility, by Guru Dasa

Undervalued and even disparaged today, humility is an essential trait for progress on the spiritual path.

In the early 1960s, Prabhupada lived in Old Delhi, with almost no money or support, as he prepared for his mission to the West.

Bringing Life Back to Prabhupada’s Palace, the Heart of New Vrindaban, by Madhava Smullen

A look at the history and current renovation of the shrine that forty years ago the New York Times called “the Taj Mahal of the West.”

The core reason for our stress and dissatisfaction is that we’ve forgotten who we are.

This is the digital download PDF version of BTG Vol. 53, No. 5. Includes the usual departments, such as Letters, Srila Prabhupada Speaks Out, Calendar, and From the Editor. Magazine, 68 pages. 8.25" x 11"