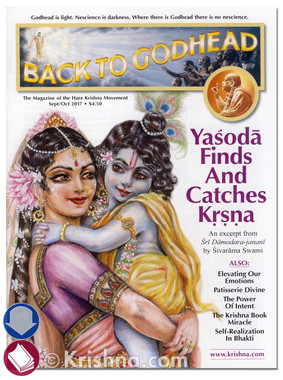 Founder's Lecture: The Real Religion of the Living Entity

Though cursed by Goddess Parvati to be born as a demon, the devotee Chitraketu retains his spiritual standing.

We can protect ourselves from emotional manipulation by learning how to activate and strengthen our higher emotions.

After finding success in selling prasadam pastries to outlets around Mauritius, Navakishora Dasa decides to start a vegetarian pastry school.

To understand who we truly are, no other path described in the Gita is as effective as bhakti-yoga.

From Osmosis to Perfection: The Importance of Sadhu-Sanga, by Satyaraja Dasa

To make steady progress in bhakti we need guidance and inspiration from those more spiritually mature.

Srila Prabhupada was ready to publish a book all about Krishna, and he wanted George Harrison's help.

Some details about Krishna's endearing Damodara-lila that you've probably never heard before.

The Power of Intent, by Vishakha Devi Dasi

Some people think of karma as a blind, mechanical law, but it's not as simple as that.

This is the digital download PDF version of BTG Vol. 51, No. 5. Includes the usual departments, such as Letters, Srila Prabhupada Speaks Out, Calendar, and From the Editor. Magazine, 68 pages. 8.25" x 11"