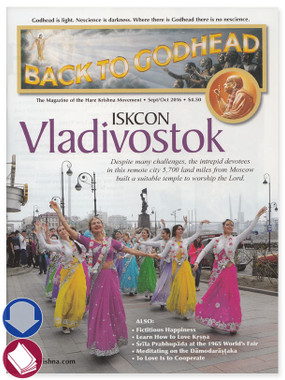 This is the PDF edition of the Sept/Oct 2016 issue of BTG, a 64 page magazine that focuses on Krishna consciousness. Back to Godhead is a magazine offering articles and information on Krishna consciousness (or bhakti-yoga). The magazine is published six time each year, and is available here per issue, or as a subscription. Back to Godhead is also available online at: btg.krishna.com

Srila Prabhupada speaks on a verse that encapsulates the essential teachings of Sri Chaitanya Mahaprabhu.

Meditating on the Damodarastika, by Caitanya Carana Dasa

A prayer sung daily during the sacred month of Karttika highlights Lord Kṛishṇa’s submission to the love of His pure devotees.

When the USSR gave up its communist regime, the Krishna consciousness movement opened centers across Russia, including one in this remote city.

When Prabhupāda arrived in New York City, it was hosting the World’s Fair – and he attended.

To Love Is to Cooperate, by Suresvara Dasa

In his last days with us, Srila Prabhupada revealed the key to ensuring the survival of the Society he had founded. How I Came to Krishna Consciousness.

Spiritual Exchange: A Correspondence Leading to Krishna, by Donna Lee

An exchange of letters and a visit to Govinda’s Restaurant inspire a recovering impersonalist.

A  Riverbed of Desire, by Shatakshi Goyal

A film on the plight of the Yamuna River fulfills a dancer’s wish to portray the goddess Yamuna Devi.

This issue is Vol. 50, No. 5.  Includes the usual departments, such as Letters, Srila Prabhupada Speaks Out, Calendar, and Centers Around the World.

This is the PDF edition of the Sept/Oct 2016 issue of BTG, a 64 page magazine that focuses on Krishna consciousness.