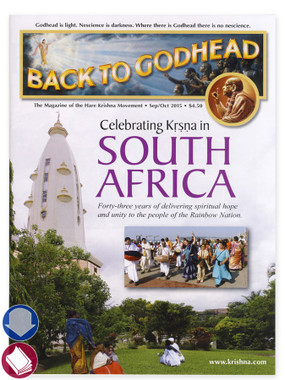 Founder's Lecture: Delivering the Message of Krishna, by Srila Prabhupada

In one of several public lectures given in South Africa, Prabhupada explains some of the history of the Krishna consciousness movement.

The Sun Behind the Rainbow, by Nikunja Vilasini Dasi

For thirty years, the spiritual message radiating from the Sri Sri Radha Radhanatha Temple of Understanding has helped unify a nation of various colors and cultures

Many young South Africans are discovering Krishna consciousness through the Bhakti Yoga Society, which operates on five university campuses in Durban and conducts a popular annual retreat.

With its thirty-two departments, the Sri Sri Radha-Radhanatha Temple of Understanding is well organized and efficient, thanks in large part to the involvement of a dedicated congregation

The Founder-Acarya Principle, by Suresvara Dasa

How the principle of "founder-acarya" of prime importance to the international Society of Krishna Consciousness, developed from four seeds, the first planted by Caitanya Mahaprabhu's direct followers.

This is the PDF edition of the Back to Godhead Magazine Vol. 49, No. 5.  Includes the usual departments, such as Letters, Srila Prabhupada Speaks Out, Calendar, and Centers Around the World.