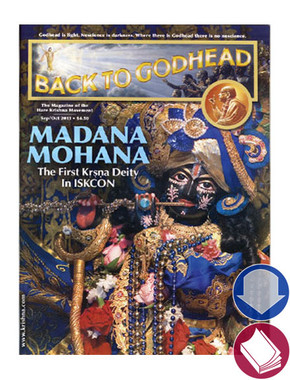 Founder's Lecture
How to Approach a Guru by Srila Prabhupada
Srila Prabhupada draws lessons from the meeting of Chaitanya Mahaprabhu and one of His most prominent disciples.

Where Is Our Education Leading Us? by Jayadvaita Swami
If we consider Vedic concepts of knowledge and education, we?ll find our institutions of higher learning lacking in the essentials.

Satisfaction - Only a Mantra Away by Archana Siddhi Dasi
A hit song from the sixties suggests an inherent problem with material pursuits.

How I Came to Krishna Consciousness: What Hare Krishna Means to Me by Mark D. Vickers
A retired British Army officer fulfills a spiritual request received more than thirty years ago.

Material or Spiritual - The Choice Is Ours by Hari Parayana Dasa
The logical consequences of the philosophy of materialism should inspire thinking people to broaden their search for reality.

Saved by the Bell: Madana-Mohana, the Story of the First Krishna Deity in ISKCON by Satyaraja Dasa
Discovered in an unlikely place in New York City, Madana-Mohana waited six years to receive standard worship.

Is the Ramayana Relevant Today? by Chaitanya Charana Dasa
Important lessons from the great epic of India show why it has survived the test of time.

Includes the usual departments, such as Letters, Srila Prabhupada Speaks Out, Vedic Thoughts, Book Section, Centers Around the World, and From the Editor.

This is the PDF edition of the September/October 2013 issue of BTG, a 64 page magazine that focuses on Krishna consciousness.