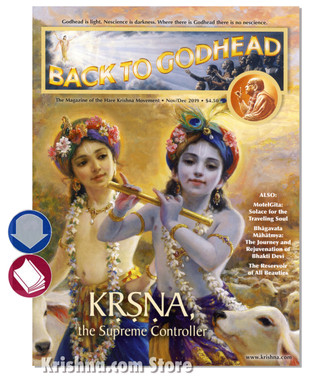 Srila Prabhupada explains that understanding God begins by recognizing that someone’s in control of nature and us.

Bhagavata Mahatmya: The Journey and Rejuvenation of Bhakti Devi, by Satyaraja Dasa

Through an allegory, a section of the Padma Purana traces the spread of devotion to Krishna in India during the current age.

Ravana, the main villain of the Ramayana, represents the selfish, harmful desires that plague our hearts.

A Small but Profound Preface, by Giriraja Govinda Dasa

An appreciation of Srila Prabhupada’s opening words in his presentation of Srimad-Bhagavatam.

Travelers in North America and elsewhere are discovering Bhagavad-gita As It Is in their hotel-room nightstands.

The Cycles Shall Prevail, by Vishakha Devi Dasi

We’re tiny creatures rotating on the wheel of time, but we can bring the miserable ride to an end.

The Reservoir of All Beauties, by Gauranga Darshana Dasa

Srimad-Bhagavatam and other scriptures reveal the unsurpassed beauty of Krishna’s form and character.

Bharata, Son of Ṛṣabhadeva, by Ishvara Dasa and Bhumipati Dasa

The history of three lifetimes of one soul – as an exemplary king, an enlightened deer, and an incognito saint.

Śrīmad-Bhāgavatam: The Book that Responds to Your Desire, by Ratnakara Dasa

While packing for a trip to America, an Indian couple must reluctantly leave their beloved Bhagavatam volumes behind.

This is the digital download PDF version of BTG Vol. 53, No. 6. Includes the usual departments, such as Letters, Srila Prabhupada Speaks Out, Calendar, and From the Editor. Magazine, 68 pages. 8.25" x 11"