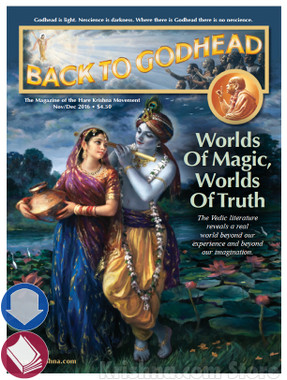 Worlds of Magic, Worlds of Truth, by Nikunja Vilasini Devi Dasi
Might our fascination with the fantastic creations of writers, artists, and filmmakers suggest something about reality?

No Newspapers! The Miner's Mentality, by Karuna Dharini Devi Dasi
Some thoughts on Srila Prabhupada's disparaging remarks about newspapers.

Devastation by Disinformation, by Chaitanya Charana Dasa
The story of Kaikeyi in the Ramayana shows how even good people can get misled into doing terrible things.

Fictional Prabhupadas, by Sureshvara Dasa
Srila Prabhupada's followers must take care to see him as he is and not create imaginary versions of him.

Are We Bound or Free? by Vishakha Devi Dasi
A multifaceted look at the question of our free will.

Austerity and Pleasure: Managing Our Sexuality While Waiting for Transcendence, by Urmila Devi Dasi
The traditional ashrama system provides support for the aspiring bhakti-yogi.

Yoga and the Great Mantra for Deliverance, by Satyaraja Dasa
Although yoga is more popular than ever, for most practitioners something essential is missing.

This is the digital download PDF version of BTG Vol. 50, No. 6.  Includes the usual departments, such as Letters, Srila Prabhupada Speaks Out, Calendar.