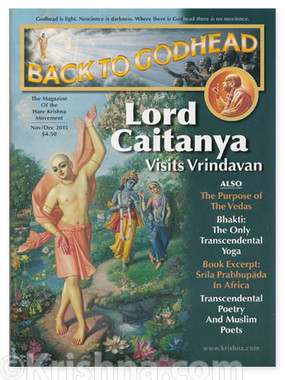 Founder's Lecture: The Purpose of the Vedas, by Srila Prabhupada

Citing the authority of Chaitanya Mahaprabhu, Srila Prabhupada explains the three stages of the Vedic Teachings.

Our Srila Prabhupada by Suresvara Dasa

As his movement continues to grow, "Swamiji" becomes "Prabhupada" and the "Founder-Acarya."

Five hundred years ago, lord Krishna returned to His eternal earthly home in His form as the Golden Avatar.

Reflections of Half a Century, by Tattvavit Dasa

Srila Prabhupada arrived in 1965 and gave America's post-war generation - the first to grow up watching TV - sound motives to learn about Krishna.

Bhakti: The Only Transcendental Yoga, by Hari Parayana Dasa

The Bhagavad-Gita describes several types of yoga, but one clearly rises above the others.

Before passing away in June, an early disciple of Srila Prabhupada recalled ISKCON's beginnings in Kenya.

For centuries, Muslim poets have revealed their attraction to all-attractive Lord Krishna.

This issue is Vol. 49, No. 6.  Includes the usual departments, such as Letters, Srila Prabhupada Speaks Out, Calendar, and Centers Around the World.