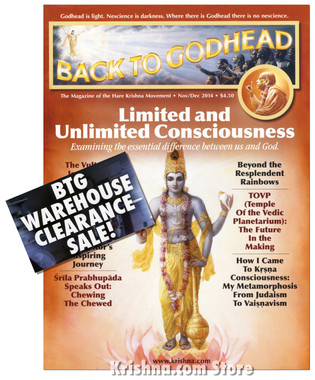 HELP SRILA PRABHUPADA SPREAD THE MESSAGE OF BACK TO GODHEAD

On the order of his guru to teach Krishna consciousness to the English-speaking world, Srila Prabhupada started Back to Godhead magazine in 1944. Now, 75 years later, Back to Godhead is still a vital tool to introduce people to Lord Krishna's valuable teachings and to nurture the spiritual life of people already familiar with those teachings. Unsold copies of BTG accumulate over time, and we now have around 9,000 magazines, going back about five years. We feel it's a shame for those magazines to lie in our warehouse rather than in the hands of people who can benefit from everything Krishna consciousness has to offer. To encourage you to help us distribute these leftover magazines, we're offering past issues at draticall reduced prices:

The Vulture Is Cursing the Cow: Prabhupada and the "God Is Dead" Controversy, by Satyaraja Dasa
Nietzche's famous phrase proved a useful foil for Prabhupada's persuasive arguments.

Freedom? by Devamrta Swami
Why we should set our sights higher than the freedoms secured by politics, economics, or social movements.

A Back to Godhead Distributor's Inspiring Journey, by Caitanya Carana Dasa
A retired college principal dedicated to helping others attain the goal of life receives Krishna's blessings at the end.

How I came to Krishna Consciousness:
My Metamorphosis From Judaism to Vaisnavism, by Len Cohen
His journey included Conservative Judaism, Native American Vision Quests, various forms of Hinduism, and a reluctance to enter a Hare Krishna temple.

Beyond the Resplendent Rainbows, by Damodara Nityananda Dasa
An engineer explains the science behind rainbows to help us appreciate the supreme artist who makes them possible.

TOVP: The Future in the Making, by Ajita Nimai Dasa
Because of essential contributions from past devotees in Chaitanya Mahaprabhu's line, the Temple of the Vedic Planetarium is rising in West Bengal.

This is Vol. 48, No. 6.  Includes the usual departments, such as Letters, Srila Prabhupada Speaks Out, Book Section, Calendar, Centers Around the World, and From the Editor.