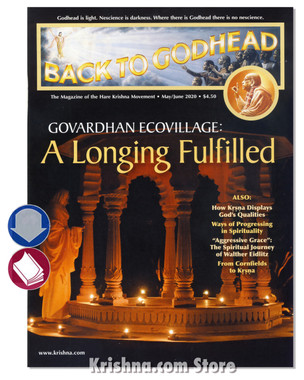 The great sage Parashara, the father of Vyasadeva, listed six essential qualities of God. Srila Prabhupada shows that Krishna has them all.

An Austrian truth-seeker in India discovers Gaudiya Vaishnavism at a WWII internment camp.

From the Use-and-Throw Culture to the Care-and-Share Culture, by Chaitanya Charana Dasa

While Ravana coldly discarded the fallen soldiers in his army, Lord Rama cherished the sacrifices of His monkey warriors.

This Krishna-centered village in India’s Sahyadri mountains arose from the desire to fulfill one of Srila Prabhupada’s primary aims for his movement.

Ways of Progressing in Spirituality, by Vishakha Devi Dasi

A close look at the three yoga processes of shravaṇa, manana, and nididhyasana reveals that they’re included in the nine processes of bhakti.

Cleanliness: Why It’s Important and How to Attain It, by Krishnanandini Devi Dasi

A disciple of Srila Prabhupada recalls some cleanliness practices that Prabhupada prescribed for a life in Krishna consciousness.

Book Excerpt: The Living Name: A Guide to Chanting With Absorption

Chanting in a Devotional Relationship, by Sachinandana Swami

Sambandha (“relationship”) is an inner orientation for chanting Krishna’s name that brings us into His presence.

How I Came to Krishna Consciousness

From Cornfields to Krishna, by Christopher Booth

“I hope they don’t come up to me,” I thought on seeing devotees for the first time. “It would be so embarrassing.”

This is the digital download PDF version of BTG Vol. 52, No. 3.  Includes the usual departments, such as Letters, Srila Prabhupada Speaks Out, Calendar, and From the Editor.