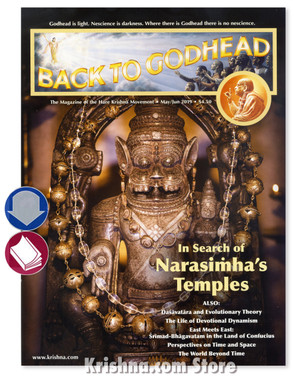 Śrīla Prabhupāda explains that although the pure devotees of the Lord are in the most exalted position, they are never proud.

The Life of Devotional Dynamism, by Caitanya Carana Dasa

A quotation from an American dancer and actress inspires thoughts about living a life of bhakti.

Exploring an interesting parallel between the order of Lord Krishna’s avatars and Darwin’s theory of evolution.

In Search of Narasimha’s Temples, by Dhruva Dasa

An introduction to some the many deities of the Lord’s half-man, half-lion incarnation four throughout India.

East Meets East: Srimad-Bhagavatam in the land of Confucius, by Savabhauma Dasa

Two brothers collaborate to write a novel through which to introduce Krishna consciousness in China.

A Case of Muslim-to-Hindu Reincarnation, by Caitanya Carana Dasa

Research into past-life memories provides evidence for the transmigration of the soul.

Fixing Racism at the Root, by Adi Purusa Dasa

The Bhagavad-gita gives the key to ending the scourge of racism.

Perspectives on Time and Space, by Giriraja Govinda Dasa

What do the Bhagavatam and Srila Prabhupada have to say about these universal concepts?

The pure lives and exemplary character of great acaryas inspire us to follow in their footsteps in our attempts to practice spiritual life.

Departments: Letters, A Pause for Prayer, Calendar, Srimad-Bhagavatam: King Prithu's Desire for Service, Srila Prabhupada Speaks Out: Out of Our Element, Hare Krishna Maha-Mantra, From the Editor: Peace, Cows, and BTG, Vedic Thoughts.

This is the digital download PDF version of BTG Vol. 53, No. 3. Includes the usual departments, such as Letters, Srila Prabhupada Speaks Out, Calendar, and From the Editor.