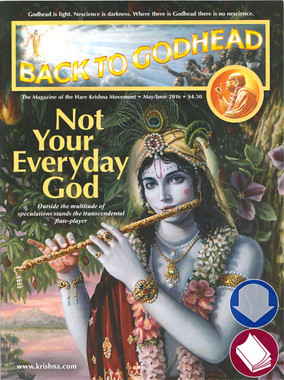 This is the PDF edition of the May/June 2016 issue of BTG, a 64 page magazine that focuses on Krishna consciousness. Back to Godhead is a magazine offering articles and information on Krishna consciousness (or bhakti-yoga). The magazine is published six time each year, and is available here per issue, or as a subscription. Back to Godhead is also available online at: btg.krishna.com

In the early days of his movement, only months after the incorporation if ISKCON, Srila Prabhupada lectures on the exalted Sri Caitanya-caritamrita.

Not your Everyday God, by Navina Syama Dasa

By learning about Krishna, people can expand their idea of what it means to be God.

Book Excerpt: What is Astrology All About? by Sri Radha Govinda Dasi

Beware the advice of the unenlightened astrologer.

fifty years after a few people watched Prabhupada board the steamship Jaladuta, thousands fill a stadium in the city of his departure to commemorate the event.

A Facelift for Pabhupada's Palace of Gold, by Satyaraja Dasa

Built in the 1970s, the monument in the hills of West Virginia is getting some much-needed restorative attention.

Srila Prabhupada: Our Founder-Acharya - His Varnasrama Challenge, by Suresvara Dasa

"Even after experiencing big changes in my life by chanting the mantra on my beads, I couldn't understand deeply what was behind these sixteen words."

The Soul, Its condition, and Its Path to Freedom, by Akshay Gupta

The first step toward the goal of self-realization is a clear understanding of the self.

Devotional culture includes charity in a variety of forms.

This issue is Vol. 50, No. 3.  Includes the usual departments, such as Letters, Srila Prabhupada Speaks Out, Calendar, and Centers Around the World.

This is the PDF edition of the May/June 2016 issue of BTG, a 64 page magazine that focuses on Krishna consciousness.