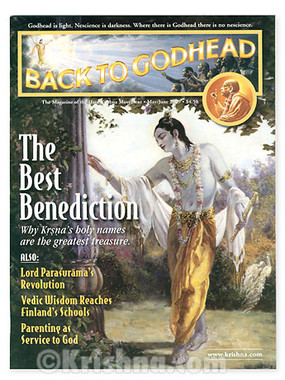 Vedic Wisdom Reaches Finland's Schools, By Krishna-kripa Dasa
Many students in Finland learn about Krishna consciousness as a standard part of their curriculum.

Parenting as Service to God, By Krishnanandini Devi Dasi
The right home environment can nurture the spiritual growth of both parents and children.

The Extra Plants, By Karuna Devi Dasi
How to ensure the vigorous growth of the "vine of devotion."

The Best Benediction, By Mohini Radha Devi Dasi
It's free, and it's the best gift anyone could ever receive.

Returning Home to Freedom, By Vraja Vihari Dasa
Krishna eagerly awaits our release from the prison of the material world.

This is Vol. 43, No. 3.  Includes the usual departments, such as Letters, Glossary, Srila Prabhupada Speaks Out, Calendar, e-Krishna, In Your Own Words, and Centers Around the World.