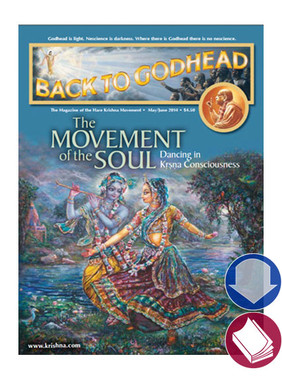 Founder's Lecture:
The Need for Ideal Leaders
Srila Prabhupada explains that anyone following the principles of the Krishna consciousness movement can rise from the lowest stage of life to the highest.

Forgiveness by Chaitanya Charana Dasa.
Some considerations: When offended, should we always forgive? How to deal with repeat offenders. Balancing forgiveness and punishment.

Exclusive Controllership Verses Self-Ownership by Dr. Aswini Kumar Misro.
We strenuously guard our right to control our own body, but how much can we really control?

The Prayers of Queen Kunti and Prabhupada's Triumph Over Adversity by Brahmananda Dasa.
When Srila Prabhupada faced challenges in his life of service to Krishna, he often took refuge in the words of Lord Krishna's aunt and pure devotee.

Once You Visit You Never Leave: A pilgrimage to Vrindavan and Mayapur by Mark D. Vickers.
The stay begins in the holy town of Govardhan, at the ISKCON temple, a place with "a real feeling of quiet devotion."

The Movement of the Soul: Dancing in Krishna Consciousness by Satyaraja Dasa.
"Chanting and dancing" has become a set phrase in the Hare Krishna movement. Here's a look at the second member of the duo.

Includes the usual departments, such as Letters, Srila Prabhupada Speaks Out, Calendar, Vedic Thoughts, and Centers Around the World.

This is the PDF edition of the Back to Godhead magazine,  Vol. 48, No. 3., the March/April 2014 issue, a 64 page magazine that focuses on Krishna consciousness.