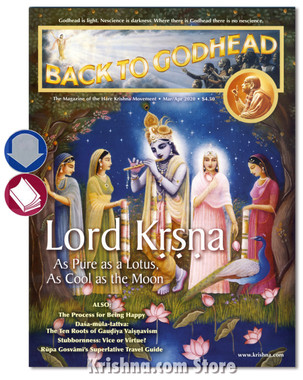 Founder's Lecture: The Process for Being Happy, by His Divine Grace A. C. Bhaktivedanta Swami Prabhupada

Srila Prabhupada explains why instead of trying to gratify our senses, we should gratify the senses of the Lord.

Dasha-mula-tattva: The Ten Roots of Gaudiya Vaishnavism, by Satyaraja Dasa

Lord Krishna: As Pure as a Lotus, As Cool as the Moon, by Vamshi Vihari Dasa

The Vedic scriptures and Vaishnava poets describe the beauty and character of Lord Krishna.

Who Is the Cause of My Suffering? by Gauranga Darshana Dasa

When suffering comes, we would do well to look beyond the immediate cause.

The Ramayana character Maricha was faced with choosing who would kill him.

An act viewed as obstinacy may in fact be one of righteous determination.

The days and nights of our passing years are Time’s soldiers, and our body’s defeat is inevitable.

Come in From the Storm, by Devamrita Swami

Genuine human progress begins when we acknowledge our predicament: our failure at material enjoyment.

The book Srila Prabhupada called ISKCON’s lawbook will direct us on our journey to Krishna abode.

This is the digital download PDF version of BTG Vol. 54, No. 2. Includes the usual departments, such as Letters, Srila Prabhupada Speaks Out, Calendar, and From the Editor.