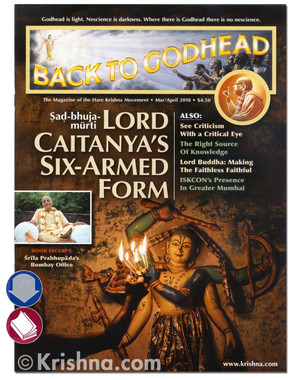 This is the PDF edition of the March/April 2018 issue of BTG, a 64 page magazine that focuses on Krishna consciousness. Back to Godhead is a magazine offering articles and information on Krishna consciousness (or bhakti-yoga). The magazine is published six time each year, and is available here per issue, or as a subscription. Back to Godhead is also available online at: btg.krishna.com

Srila Prabhupada explains why Lord Krishna is far beyond all yogis despite their magical feats.

See Criticism with a Critical Eye, by Chaitanya Charana Dasa

While pursuing our lofty spiritual goals, we must carefully guard against the fault of criticism.

A Tale of Two Disciples, by Krishnanandini Devi Dasi

The examples of Ishvara Puri and Ramachandra Puri are instructive for anyone who wants to progress in spiritual life.

Book Excerpt: Bombay Is My Office

Prabhupāda spent much time in Bombay unfolding his plans for spreading Krishna consciousness in India.

An overview of ISKCON temples in this leading metropolis and some of the projects connected to them.

So great was Bilvamaṅgala Ṭhākura's devotion that Kṛṣṇa would regularly come to meet him.

Suggestions on how Vaiṣṇavas should think of Lord Buddha today.

When Lord Caitanya showed this special form, He revealed three aspects of His all-attractive nature.

Departments: Letters, A Pause for Prayer, Calendar, Srimad-Bhagavatam: Lord Vishnu Instructs King Prithu, Srila Prabhupada Speaks Out: The Right Source of Knowledge, Hare Krishna Maha-Mantra, From the Editor: Being with God to Be With God, Vedic Thoughts.

This is the digital download PDF version of BTG Vol. 52, No. 2. Includes the usual departments, such as Letters, Srila Prabhupada Speaks Out, Calendar, and From the Editor. Magazine, 68 pages. 8.25" x 11"