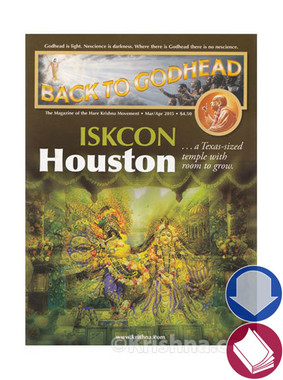 Founder's Lecture: Why We Must Purify Our Existence, by Srila Prabhupada

Srila Prabhupada speaks on the occasion of initiating into the chanting of the holy names of the Lord.

Arjuna and Us, by Visakha Devi Dasi

As death nears, souls preparing for their next destination find spiritual solace in Krishna's sacred land.

Is Religion the Opium of the Masses? by Sarvabhauma Dasa

Or might religion be the antidote for the mental haze induced by the real drug?

A Texas-Sized Temple With Room to Grow, by

Lord Krishna descended as Sri Caitanya Mahaprabhu to deliver us from our own painful folly.

Matchless Gifts, the Movie: A Case of Spiritual Serendipity, by Satyaraja Dasa

A nearly lost movie provides a glimpse into Hare Krishna roots in America.

This is Vol. 49, No. 2.  Includes the usual departments, such as Letters, Srila Prabhupada Speaks Out, Calendar, and Centers Around the World.

This is the PDF edition of the March/April 2015 issue of BTG, a 64 page magazine that focuses on Krishna consciousness.