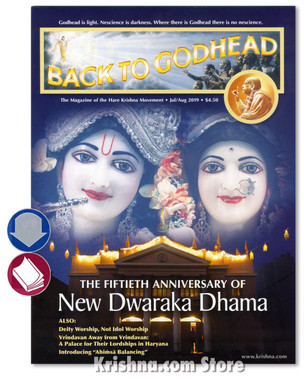 Srila Prabhupada explains that authorized worship of the deity in the temple is grounded in the Vedic scriptures.

Ajnata-sukriti: The Mystery of Unintentional Devotion, by Satyaraja Dasa

How Lord Krishna allows us to take our first spiritual steps often without our knowledge.

Some lessons we can learn from Hanuman’s fixity of purpose in his service to Lord Ramachandra.

A proposal for dealing with the challenge of being pro-dairy but anti-cruelty.

Until we realize our spiritual identity, we’re essentially asleep.

Vrindavan Away from Vrindavan: A Palace for Their Lordships in Haryana, by Radhika-kripa Devi Dasi

A donation of land offered in the 1970s culminates in an impressive new temple outside New Delhi.

Our Deities' Mysterious Past, by Paresh Mistry

The story of how Jagannatha, Baladeva, and Subhadra made their way to the home of a family in the UK.

Departments: Letters, A Pause for Prayer, Calendar, Srimad-Bhagavatam: King Prithu's Unmatched Sovereignty, Srila Prabhupada Speaks Out: “Here is Krishna,” Hare Krishna Maha-Mantra, From the Editor: “One of the Means to the Way,” Vedic Thoughts.

This is the digital download PDF version of BTG Vol. 53, No. 4. Includes the usual departments, such as Letters, Srila Prabhupada Speaks Out, Calendar, and From the Editor. Magazine, 68 pages. 8.25" x 11"