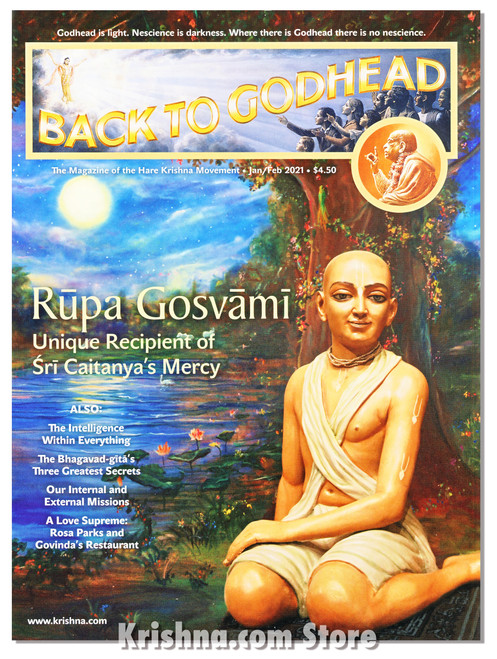 Founder's Lecture: The Intelligence Within Everything, by His Divine Grace A. C. Bhaktivedanta Swami Prabhupada

Srila Prabhupada explains that, like our own body, the universe develops because of the spirit within it.

FEAR: An Acronym for Facing Fear, by Chaitanya Charana Dasa

Here’s a strategy to deal with fear: Focus, Arise, Engage, and Release.

Book Excerpt: Disapproved but not Disowned: A Sneak Peek into Sensitive Hearts

A Glowworm in Front of the Sun, by Gauranga Darshana Dasa

Lord Brahma, the powerful creator of the universe, tests Lord Krishna and realizes he has more than met his match.

In the mid-1990s, one of Time magazine’s twenty most influential and iconic figures of the twentieth century was a regular diner at Detroit’s Hare Krishna restaurant.

When God Offers a Discount, by Jitendra Savanur

To say that Sri Chaitanya Mahaprabhu came to offer the sale of the century would be an understatement.

In the seventeenth century, the sankirtana movement flourished in Maharashtra thanks to the efforts of this inspired devotee.

Lord Krishna’s instructions to Arjuna involve various levels of confidentiality in regard to the nature of reality.

Our Internal and External Missions, by Vishakha Devi Dasi

Sri Chaitanya Mahāprabhu ordered His followers to work for the ultimate benefit of themselves and others.

Departments: Letters, A Pause for Prayer, Calendar, Srimad-Bhagavatam: King Prithu Receives the Kumaras, Srila Prabhupada Speaks Out: Always Some War, Hare Krishna Maha-Mantra, From the Editor: With Krishna at the Beach.

This is Vol. 55, No. 1. Includes the usual departments, such as Letters, Srila Prabhupada Speaks Out, Calendar, and From the Editor.

Back to Godhead, USA Subscription

Back to Godhead, USA Subscription Renewal

Back to Godhead, International Subscription

Bhagavad-gita As It Is, Deluxe